murals in areas underserved by the arts brighten and celebrate the lives of of our neighbors.

Each summer we work with interns aged 14-19, from Columbia’s Career Awareness Related Experiences (CARE) Program.  Interns are paid to create public art with a difference: each mural is created in consultation with those who will see it on a regular basis. Each honors or educates local people,  and each builds a sense of pride and helps to connect interns with their fellow Columbians.

For our friends at the Columbia Housing Authority’s Moving Ahead Program: The Great Barrier Reef 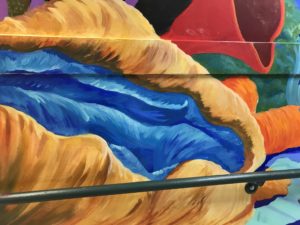 This giant Blue Clam is from our mural of Australia’s Great Barrier Reef created in 2019 in the Blind Boone Community Center on Providence Road. Yes, these clams are really blue. They can weigh up to 44o pounds, grow to over two feet across, and live up to 100 years! See the whole mural HERE. Then scroll down to learn about the fascinating creatures that kids at Moving Ahead chose to be part of the mural. 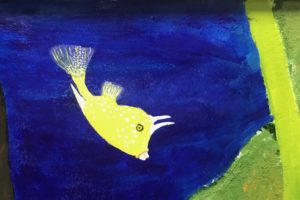 How many fish can you find in the mural?

There are over 100 fish in this mural! 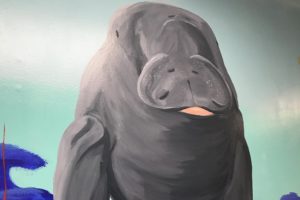 This is a dugong. It is a mammal like you are. It breathes air and feeds milk to its babies. How many other mammals can you find in the mural?

There are four other mammals in the mural: a MOTHER AND BABY WHALE and TWO DOLPHINS. Did you find them? 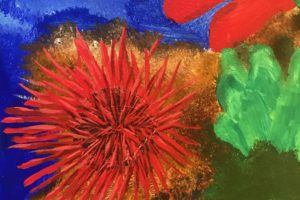 How much of the background of the mural shows living animals?

Almost all of it! The SPONGES and SEA FANS, ANEMONES and the Clown Fish that hide in them, corals like BRAIN CORAL,  and sea urchins (shown here) are all animals! Can you find those types of animals in the mural? 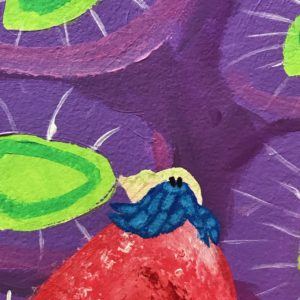 This is a Hermit Crab. It lives in the shell of a dead snail. When it grows too big for the shell it will go shopping for a new shell that fits just right. How many other Hermit Crabs can you find in the mural?

There are six other Hermit Crabs hiding in the mural. Click HERE to watch Hermit Crabs changing their shells. 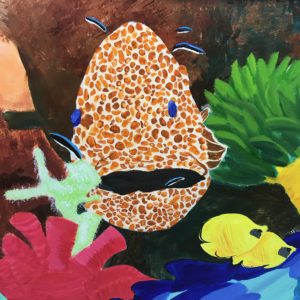 Why does this big fish have little fish in his mouth?

This is a baby Grouper. His mom is much, much bigger! He is at a cleaning station where tiny fish called Wrasses are cleaning his mouth and skin. By not eating them, he gets his teeth brushed, and by being brave they get a meal from the dirt in his mouth! How many brave Wrasses can you count? 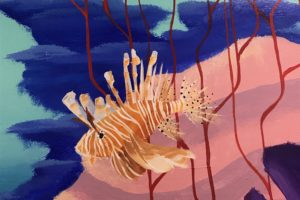 This beautiful Lion Fish has poison in his spikey fins. How many other poisonous animals are in the mural?

There are two other animals that can be poisonous to humans and they are both little and cute! They are the BLUE RINGED OCTAPUS and the PUFFER FISH. Did you find them? 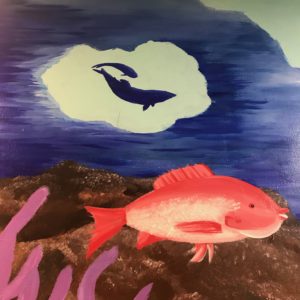 The animals in the distance are a whale mother and baby. Do you know how whales talk to each other?

They sing! What a beautiful sound! 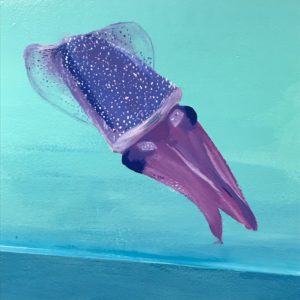 This purple squid has 10 legs but his near relative, the octapus, has only 8 legs. There are two octapuses and one more squid in the mural. Can you find them?

One is the little BLUE RINGED OCTAPUS who is sitting on the sand. One is the large brown and white MIMIC OCTAPUS who can make himself look like many other colors and animals. The last one is the teeny tiny SQUID who is hiding on the bottom near where the artists signed the mural. Did you find them? 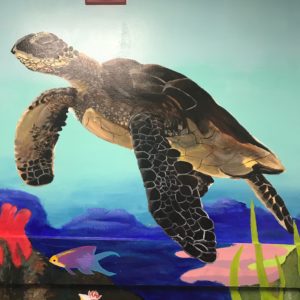 This sea turtle can't breathe under the water so it must spend lots of time on land, right?

Wrong! If it is a male he will never set foot on land again after the day it hatches. If it is a female she will return to the same beach where she hatched one day each year to lay her eggs in a sandy nest. Watch the whole thing HERE. 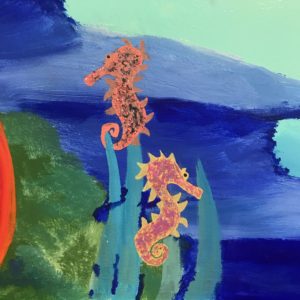 These are a mom and dad sea horse. Where are their babies.

In the dad’s stomach pouch! The dad has a pouch like a kangaroo where the mom puts hundreds of eggs. The babies hatch and grow in the dad’s pouch until the day that hundreds of them swim out in a cloud of baby Sea Horses! Watch this father sea horse have 2000 BABIES! 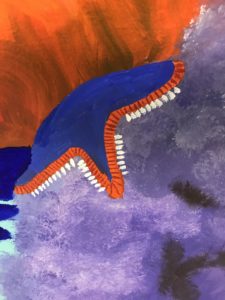 This starfish has five legs that it uses to open yummy clams. Can you find three other starfish in the mural?

Did you find them? There is a PURPLE ONE, a RED POLKA DOTTED ONE, a special kind of starfish called a BRITTLE STAR. 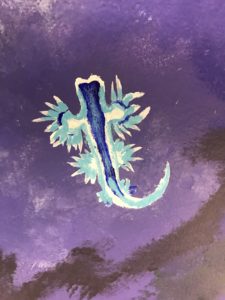 This strange and colorful creature is called a Nidubranch. It is like a clam except it crawls around without a shell. There is also a red, white and yellow nudibranch in the mural. Can you find it?

Special thanks to Veterans United Home Loans and their eleven interns who helped out!

For our friends at Columbia Housing Authority’s Oak Towers: Many Hometowns, One Home

Created in 2018 after speaking with residents of the tower, this mural depicts symbols of all of the cities and countries of origin of residents who have chosen to make Columbia their home. The theme of “home” is repeated in English, Arabic, Kiswahili, Spanish and Somali at the top of the mural. These are all languages spoken by Oak Tower residents.

For our friends in the Ridgeway Neighborhood: A Beautiful Community Together 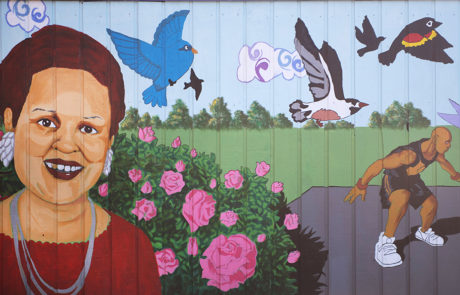 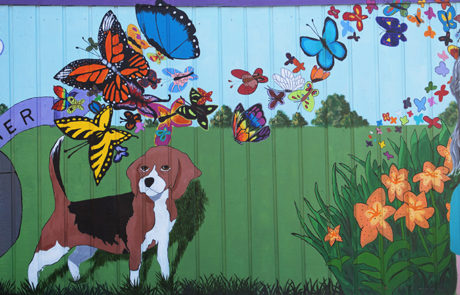 This mural in Optimists Park on Grand Street in Columbia’s Ridgeway Neighborhood was created in 2017. Interns did a door to door survey of local residents to generate themes and motifs for the mural. The two women depicted are pillars of this community. On the left is Mary Smith, a long time business owner, church mother and role model. Mary’s business is directly across Forest Ave. from the park. On the right is Pat Kelley, past president of the Ridgeway Neighborhood Association, community advocate and friend to those in need. Pat’s house is directly across Grand Street from the park. The two boys depicted on their bikes live just one block down Grand Street from the mural and the flowers were modeled on those in the gardens of residents on 3rd Ave.

This mural, created in 2017, beautifies the Downtown Optimists Building on Grand Street facing the Loop. It depicts three of the Optimists’ major annual initiatives on behalf of children in our community: Bike Safety Week, the Soap Box Derby and their Christmas Sales fundraiser.